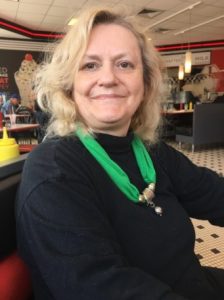 Arden Shaffer, 64 year old mother and grandmother, is currently enrolled in PACE of the Southern Piedmont.  On any given day, one can find Arden proudly wearing her Ambassador’s badge, and participating in an array of activities, promoting the overall wellbeing of her mind, body, and spirit.  When listening to her stories about working for the Federal Bureau of Investigation (FBI), and then devoting over 20 years of service as a Registered Dietitian, it is clear that Arden is no stranger to hard work and setting goals.  “My number one goal in life was to work hard, so I could benefit from everything that comes along with early retirement,” states Arden proudly.

However, early retirement did not quite happen the way Arden was hopeful for.  She became ill in her early 50’s, increasing her falls at home.  When things became unmanageable for Arden alone, Amanda Paugh, daughter and now caregiver for Arden, had no other choice but to move her mom back home to North Carolina.  As a full time mother and employee, Amanda knew caring for her mother was going to be a challenge.  “She was literally hospitalized and admitted at least every 3 months due to frequent falls,” describes Amanda.

Arden began seeing a Neurologist not long after her relocation.  Falls continued to be frequent, and Arden’s ability to function continued to decline.  “We thought my mother had had a stroke.  She was no longer able to cook, use the microwave, fold clothes, button her shirt, or walk,” states Amanda.  In fact, Arden’s likelihood to walk again was slim to none, according to her Neurologist.

Following months of testing, and a referral to the Neurosurgeon, Arden was finally diagnosed with hydrocephalus. After, 6 spinal taps to remove fluid from the base of her brain, Arden finally was cleared for surgery to have a shunt placed, in hopes to begin receiving some relief.  Upon discharge from the hospital, Arden was sent home with home health services, and introduced to PACE.

While initially reluctant, Arden was open-minded to the program after touring the center.  “People were so warm and welcoming at PACE, and I immediately began to build confidence in my ability to regain what I had lost so early in life.” On June 1, 2014, Arden made a life changing decision, and enrolled into PACE of the Southern Piedmont. Through the program’s preventive model, and a team approach to participant centered care, a plan was created to meet all of Arden’s needs.

Despite the 42 falls and numerous hospitalizations that took place before PACE, Arden gained the courage and strength to begin working on what she was told would never be possible.  Arden was going to learn to walk again.  After several months of working with the rehab department, Arden was able to graduate from her wheelchair, then walker, and now only walks with the assistance of a cane.  “Seven years of what felt like a roller coaster had finally ended,” Amanda shares with relief.

Of course Arden was not ready for her successes to stop there.  Arden was ready to regain independence in her own home.  While it took 6 months of collaboration with her Social Worker, Interdisciplinary Team, Amanda, and a referral to a neurologist to work on cognition issues, Arden was finally able to transition successfully into a Charlotte Housing Authority (CHA) Senior Apartment. Arden was once again living independently.  Amanda was fearful of the move, “I felt like I was sending my child off to college for the first time; however I am thrilled she is thriving now and seems to have so much pride in her independence.  I thought I would never see this day again.”

A transition miracle had taken place according to Amanda, and Arden truly believes PACE was a lifesaver for her and her family.  Arden has a CNA, coordinated by PACE, that helps her daily in the home with medication management, moderate cooking, and safety in the shower.  Arden also attends the Day Health and Wellness program, where she continues to receive training on how to function safely in the home, build her strength, and socialize with a group of her new found friends.  “I love getting a good laugh as I relate to those my age, and we talk about kids and the crazy things they do today,” stated Arden cheerfully.

Arden is thankful for all of the services provided by her Primary Care Physician, and the Day Health and Wellness Center. She is very pleased to announce that she has not been hospitalized for a fall since enrolling in PACE of the Southern Piedmont over 2 years ago.  Amanda is thankful for the constant communication that takes place between her and the interdisciplinary team.  “It is almost like there is a layer in my life I am now allowed to let go of, and let PACE.”